On the 18th of July a sunny Saturday twelve Redbacks made their way down to Stuttgart to take on the Zuffenhausen Giants. Zuffenhausen managed to secure a new home ground, which meant conditions were excellent for a big game.

In the warm-up everyone shook off the sleepy travel legs and started to focus on what lied ahead. Zuffenhausen had had similar scores against the Rheinland lions and Heidelberg knights as we had. They had also already played the Munich kangaroos which they only lost by two goals. So we wanted to play the game on our terms and make a statement early.

At the first bounce, we made our intentions clear. The ball got worked into the forward line early creating options for the forwards to convert. Some big tackles and pressure acts in the forward line created more opportunities. The back line led by Martin Krichler and Gerard Forelli was almost impenetrable in the first quarter. This meant that we finished the first quarter with 4 goals and 4 behinds. The Giants were kept goalless.

During the break we knew the giants would regroup and try and get back into the game. So we wanted to stick with what was working for us. That was talking and taking the easy options. Sebastian Handke continued his dominance in the ruck and was complimented in the middle by Jase Edwards’ and Andrew Molloy’s attack on the ball. A well organised and skilled second quarter saw us extend our lead to 47 points.

Half-time gave the Giants another opportunity to regroup and adjust. We knew what was coming and made sure our focus didn’t drift. Because as we all know it’s not over until the fat lady sings. But it seemed the Giants didn’t have an answer for our midfield. If the ball wasn’t won by us and spilled out the back Xavier Cromer was there to clean up and provide forward momentum which ended up being more goals for us. Santiago Rubio, Constantin Haupt and Gokhan Kocmer kept providing running targets up and down the ground. The third quarter was a lot more contested as fatigue on both sides started setting in. Nonetheless, by the end of the third quarter, we had further extended our lead.

We entered the last quarter with a very comfy lead and may have switched off a little in the first 5 – 10 Minutes. The Giants weren’t going down without a fight. They came out firing and put three consecutive goals on the board very quickly. We were all a little shocked but managed to regroup and get back in control of the game. After the initial onslaught, we were able to put 6 consecutive goals of our own on the board to finish off the quarter.

In the end, we won comfortably by 79 points. This result was achieved by four quarters of team play. Everyone was switched on from the first bounce and stuck to the game plan for all four quarters. The final goalkicking numbers were Matthias Klusemann (8),  Xavier Cramer (3), Constantin Haupt (2), Santiago Rutio (2), Andrew Molloy (1), Juan De Ildefonso (1) and Sebastion Handke (1). After a corona interrupted pre-season the benefits of consistent training started to pay off. The team is connecting well on- and off the field. And the less experienced players are benefiting from well-organised training.

A special mention to our first gamer in Constantin Haupt who had a brilliant performance with lots of run and attack on the footy. He also managed to score his first goal for the Redbacks which in the end was celebrated with an obligatory shoey.

Now it is time to focus on the next game ahead, which will be the undefeated Munich kangaroos.  We will make sure to bring the fight and make them earn everything.

Thank you Zuffenhausen for your hospitality until next time. 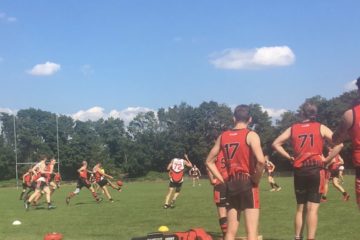